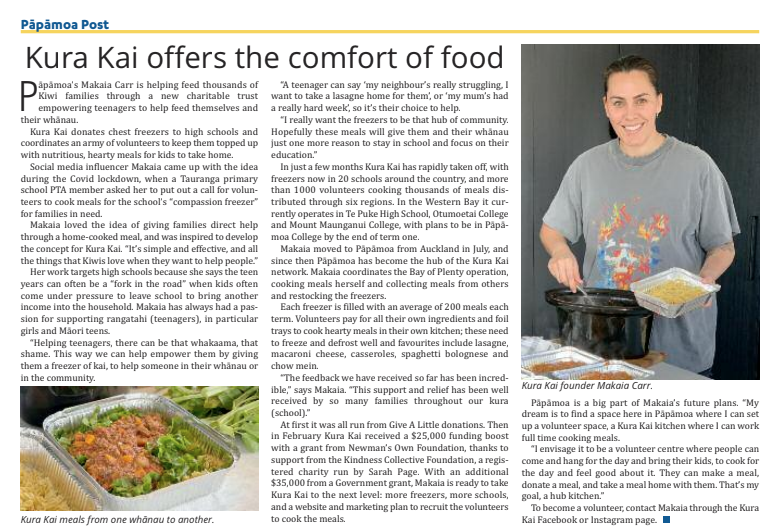 Pāpāmoa’s Makaia Carr is helping feed thousands of Kiwi families through a new charitable trust empowering teenagers to help feed themselves and their whānāu.

Kura Kai donates chest freezers to high schools and coordinates an army of volunteers to keep them topped up with nutritious, hearty meals for kids to take home. Social media influencer Makaia came up with the idea during the Covid lockdown, when a Tauranga primary school PTA member asked her to put out a call for volunteers to cook meals for the school’s “compassion freezer” for families in need.

Makaia loved the idea of giving families direct help through a home-cooked meal, and was inspired to develop the concept for Kura Kai. “It’s simple and effective, and all the things that Kiwis love when they want to help people.” Her work targets high schools because she says the teen years can often be a “fork in the road” when kids often come under pressure to leave school to bring another income into the household. Makaia has always had a passion for supporting rangatahi (teenagers), in particular girls and Māori teens.
“Helping teenagers, there can be that whakamā, that shame. This way we can help empower them by giving them a freezer of kai, to help someone in their whānau or in the community.”

“A teenager can say ‘my neighbour’s really struggling, I want to take a lasagne home for them’, or ‘my mum’s had a really hard week’, so it’s their choice to help. “I really want the freezers to be that hub of community. Hopefully these meals will give them and their whānau just one more reason to stay in school and focus on their education.” In just a few months Kura Kai has rapidly taken off, with freezers now in 20 schools around the country, and more than 1000 volunteers cooking thousands of meals distributed through six regions. In the Western Bay it currently operates in Te Puke High School, Otumoetai College and Mount Maunganui College, with plans to be in Pāpāmoa College by the end of term one.

Makaia moved to Pāpāmoa from Auckland in July, and since then Pāpāmoa has become the hub of the Kura Kai network. Makaia coordinates the Bay of Plenty operation, cooking meals herself and collecting meals from others and restocking the freezers. Each freezer is filled with an average of 200 meals each term. Volunteers pay for all their own ingredients and foil trays to cook hearty meals in their own kitchen; these need to freeze and defrost well and favourites include lasagne, macaroni cheese, casseroles, spaghetti bolognese and chow mein.

“The feedback we have received so far has been incredible,” says Makaia. “This support and relief has been well received by so many families throughout our kura (school).” At first it was all run from Give A Little donations. Then in February Kura Kai received a $25,000 funding boost with a grant from Newman’s Own Foundation, thanks to support from the Kindness Collective Foundation, a regis-
tered charity run by Sarah Page. With an additional $35,000 from a Government grant, Makaia is ready to take Kura Kai to the next level: more freezers, more schools, and a website and marketing plan to recruit the volunteers to cook the meals.

Pāpāmoa is a big part of Makaia’s future plans. “My dream is to find a space here in Pāpāmoa where I can set up a volunteer space, a Kura Kai kitchen where I can work full time cooking meals. “I envisage it to be a volunteer centre where people can come and hang for the day and bring their kids, to cook for the day and feel good about it. They can make a meal, donate a meal, and take a meal home with them. That’s my goal, a hub kitchen.”